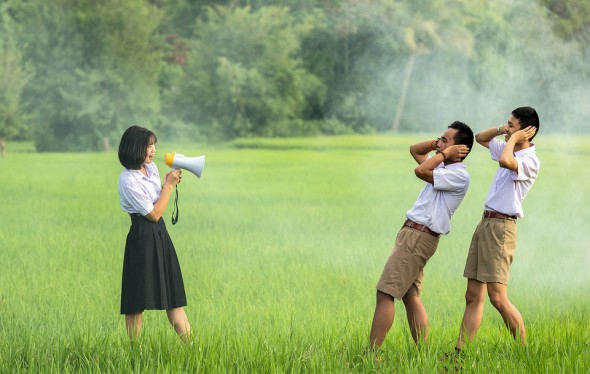 Have you heard of echolalia? The word may sound nice, but echolalia can be irritating. It is the repetition of phrases, words or parts of word and may be a sign of autism, other neurological conditions, visual impairment, or developmental disability.

I know someone (we’ll call him Frank) who, although extremely intelligent and capable, repeats himself constantly. He goes through the same loop of ideas over and again, commenting on a limited range of topics such as the weather (too hot, too cold) the time (late, early), or the TV show or subject he is currently obsessed with (now Game of Thrones, in the past UFOs, Ancient Egypt, the red palm weevil). He also likes singing or whistling a few bars from a song constantly, like a broken record (sometimes for days or even weeks). This is excruciatingly irritating. I have several strategies for dealing with this assault on my eardrums. I tell him to be quiet. If that doesn’t work, I put on some headphones and turn up the volume, or I go into another room and close the door.

On the other hand, my friend Lucy, who is terrified that she has early onset Alzheimer and has recently had a brain scan, also repeats herself, but in completely different way. She just forgets she has told me things, and tells me again. We only see each other a few times a year, so it is quite understandable when she forgets that she has told me an anecdote before. In any case, I love listening to her, because she is engaging with me, conversing with me and aims to amuse.

Although Fred and Lucy both repeat themselves, the effect they have on me is very different. Frank is talking to himself when he drones on about the weather and talks about Game of Thrones, and the result is that I feel irritated, bored, and frustrated. He knows he is getting on my nerves, but he keeps on doing it. However, when Lucy tells me about her cat’s arthritis for the tenth time I feel concerned and compassionate, and wonder whether I ought to tell her that she is repeating herself, which is what she has asked me to do.

Why should these be such difficult situations to deal with? I don’t want to tell Lucy because she will think that she is boring me and is losing her mind (which she isn’t). I know I feel horrified if I repeat myself or am forgetful. But with Frank I have tried everything from sticking my fingers in my ears and singing Land of Hope and Glory to shouting, “Shut up!”

Now, let me ask you something… Have you heard of echolalia?