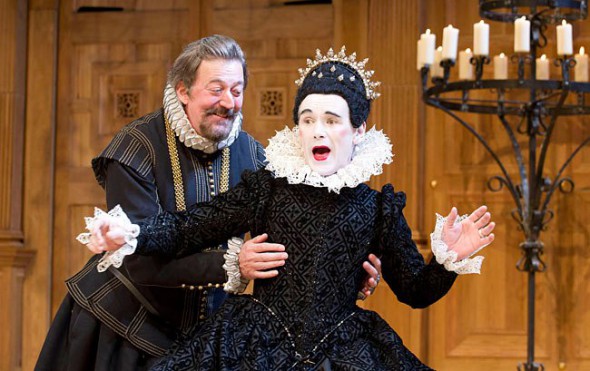 As bored as I am with the goings-on at the White House, it is surprising that Trump is so upset that comedian and actress Melissa McCarthy has been cast as his press secretary, Sean Spicer in comedy show Saturday Night Live. Cross-gender casting has always been part of the theatre, but the leader of the free world is reportedly put out because he thinks that being portrayed by a woman makes his nominee look ‘weak’.

However, everyone who reads books knows that there is an honorable tradition of cross-gender casting, which is when an actor or actress portrays a character of the opposite gender. In ancient Greek theatre, men played women and in modern Japanese kabuki theatre, they still do and ‘weakness’ doesn’t come into it.

Shakespeare often had fun with cross-dressing and gender-bending. Several of his comedies revolve around the hilarious confusions and insights that arise from female characters disguising themselves as men. Also, although the playwright’s main roles are for men, over the years, numerous great female actors have been cast in these roles, with magnificent results.

The device was used to great comedic effect in As you like it, when Rosalind pretends to be a handsome young man, Ganymede, and offers to tutor her Beau, Orlando, in the ways of love. Rosalind is strong and witty, while Orlando is gullible. In Twelfth Night, Viola disguises herself as Cesario, a page to Duke Orsino, with whom she falls in love. In The Merchant of Venice, several ladies dress as men: Jessica masquerades as a man to elope with her love, Lorenzo, while leading lady Portia and her lady-in-waiting Nerissa present to be law clerks.

Hollywood has always loved a bit of cross-gender hilarity. One example that comes to mind is the Oscar-winning Some Like it Hot (1959), which starred Marilyn Monroe, Tony Curtis and Jack Lemmon. The plot features two Chicago musicians who witness the St. Valentine’s massacre and dress up in drag, joining an all-girl band to get out of town. Memorable, newer comedies with a cross-dressing component include Dustin Hoffman’s incredible performance in the smash hit comedy, Tootsie, in 1982 and Mrs. Doubtfire, starring the late great Robbin Williams in 1993.

Another, more serious but brilliant gender-bending movie I watched again recently is Albert Nobbs, which stars Glen Close as an English woman who disguises herself as a male butler to find work in 19th century Ireland. Hardly a weakling!

Now that the White House has become an always-on reality show with an endless cast of characters ripe for parody, I look forward to seeing more of this imaginative casting. If you can’t beat it, you can at least laugh at it!