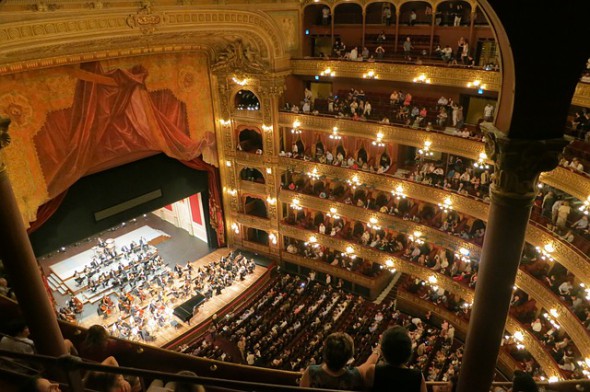 You only get one life, so you can’t do everything, but you can try! It’s never too late to explore something new. For example, I’ve just discovered that I love something that I have always rejected! Opera! And I would been ignorant forever if I hadn’t gone to the local cinema on Wednesday to see Verdi’s La Traviata.

La Traviata is the world’s most frequently performed opera, and apparently everyone had already seen it except for me. But now I have, thanks to the Royal Opera House’s season of cinema screenings. On 30 January the company’s production of Verdi’s La Traviata was relayed to more than 1,000 cinemas around the world, including my local cinema. Starring Ermonela Jaho as Violetta Valéry and Charles Castronovo as Alfredo Germont, with the magnificent Placido Domingo as Giorgio, this was truly an unforgettable evening. I had always thought that opera was inaccessible… an incomprehensible cacophony of screeching, but I couldn’t have been wrong. This performance has made me ‘mad for opera’!

This tragic story, based on Alexandre Dumás’ La Dame aux Camélias (1852), is a tale of love and death. Albanian soprano Ermonela Jaho was beyond brilliant as the consumptive Violetta, reducing the gentleman on my right and the lady on my left to tears during the harrowing final act. It’s hard to believe that a human being can give such an emotional performance and make such beautiful sounds at the same time. I want to share the love, so for your pleasure, I’ve found a clip of Ms Jaho in this role on YouTube, but with a different leading man, and here are the haunting lyrics to help you to understand. (https://www.youtube.com/watch?v=9GKGk_3LT3M)

And the good news is that this was not an isolated event. On 19 February, at a cinema near you (I hope) you can see Carlos Acosta’s production of the ballet Don Quixote. If you are interested in learning about this and the entire cinema season, visit https://www.roh.org.uk/showings/don-quixote-live-2019 . There’s a search engine for finding venues where you can enjoy these events, too. Who knows, you might fall in love with ballet and opera, too.