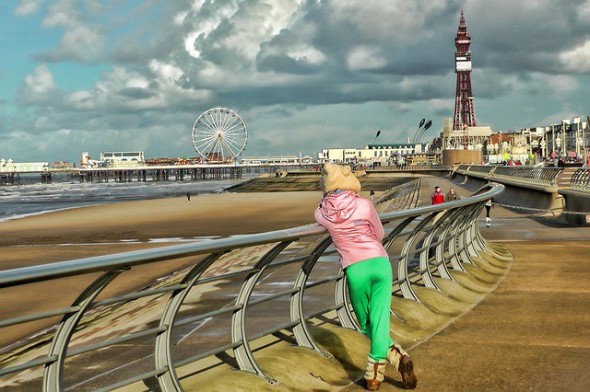 We do like to be beside the seaside… especially when there’s some entertainment to enjoy. Summer is almost over, but even though the August crowds have gone scuttling back their offices and classrooms, there is still plenty to enjoy in September.

If you are in England, then you might like to visit Blackpool (after London, Blackpool is the second most visited place in Britain), to see a very well-established tourist attraction that dates to 1879 and still attracts hundreds of thousands of visitors every year. Blackpool is seaside resort on the northwest coast of England renowned for attractions like the pleasure beach and the illuminations. You might wonder why people make such a fuss is about a few lights, but there are more than 500 designs in the Blackpool Illuminations, and the cables and wiring stretch for over 200 miles, so it’s quite a sight!

The Blackpool illuminations were born when the local Council invested the sum of £5,000 to experiment with the concept of electric street lighting. This amazing spectacle had been advertised all over the land and, incredibly, between 70,000 and 100,000 visitors travelled from far and wide to witness the event. This new-fangled light was called “artificial sunshine” and these were possibly the first electric street lights in the world! These days, the pleasure beach, an old-fashioned amusement park with vintage wooden roller coasters is also decked with lights, as are the trams and streets in general, making a stroll through the town a magical experience.

Back to the future, this month sees the final stage of European directive that bans importing or manufacturing in candescent light bulbs. The directive was introduced by the EU in 2009 to reduce sales of ‘high-energy’ light bulbs and encourage the uptake of alternative, energy-saving technologies like LEDs. Naturally, the Blackpool Tower is lit from top to bottom with environmentally friendly LED lights!

When the fun is over, it takes 14 weeks to take down all the lights of the Blackpool Illuminations, but then it’s time to put up the Christmas lights, which cause just as much excitement and anticipation. Switching on the festive lights in Blackpool is another big event, accompanied by performances and fun. Don’t miss it on your next trip to the UK!