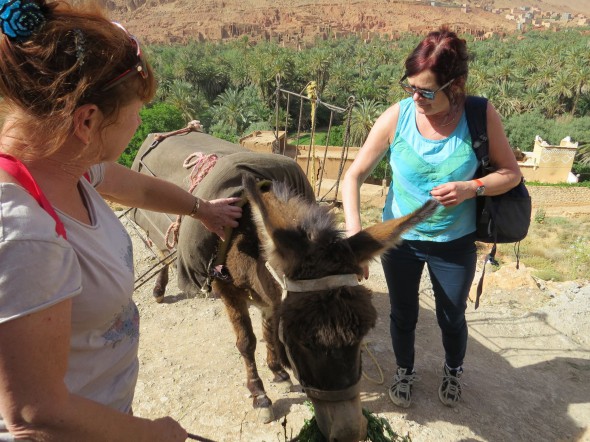 It doesn’t matter how good you think you are at packing, you’ll always end up forgetting something you need, but include piles of garments and other items that you don’t need. I know. I never get it right.

However, I’m not as bad as my friends Javier and Pascual, who went on a trip to Cordoba this summer for a meeting at the university. It was an important meeting, so they packed smart clothes. As you probably know, Andalusia gets very hot during the summer months, and they decided that they travel in comfort in their beach shorts, sandals and vests, and that they would then change when they reached their destination hotel.

When they arrived, they opened the boot of the car, and to their horror, it was completely empty. Panic stricken, they assumed that someone must have taken their cases while they were having a coffee at a service station. What were they to do? They would have to call the police. Just then, Pascual’s mobile phone rang. It was another friend of ours, Teresa, who was house and dog-sitting, calling to find out what to do with the two cases in the hallway. Yes. They hadn’t been robbed. They had left their cases at home! They just about had time to run to the nearest shop and buy some trousers, shirts and shoes before their meeting. What a nightmare!

I know I’m not the only lousy packer. Despite trying to keep our luggage to a minimum in Morocco in May, every one of my group of eight friends travelled with a giant suitcase packed with enough hair products, outfits and makeup to open a boutique or salon. However, it didn’t seem to matter until we reached our accommodation at the Palmeraie Guesthouse in Todra Gorge. The description on the webpage did mention that access was a bit difficult, but I didn’t realise I would have to abseil into the hotel. The only way to get down to the hotel was by negotiating a slippery unmade path down a steep hill.

The steep hill which would have been bearable… without the 30 kg suitcases. To help workers from the hotel brought up a little donkey to carry our cases. We felt so sorry for the poor thing. It didn’t look strong enough to carry even one of our heavy bags. I guiltily dragged my own case down the hill but some of the others gave in and watched, horrified, as it wobbled on its little spindly legs under the weight of our shameful Western materialism.

Things were different the next day. The sun was hot by the time we finished our breakfast. The steep slope was a slap in the face as we opened the front door of the guest house. This time, nobody felt sorry for the donkey. It struggled up and down the hill, carrying our junk back to the minibus. We left an enormous tip… I can only hope that the keepers spent at least some of it on a bag of carrots.