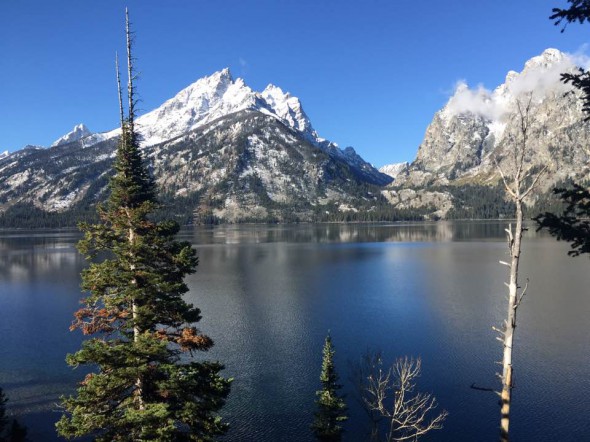 Last Saturday evening we picked up a giant GMC Yukon from Salt Lake City Airport, and after a good night’s sleep in a comfy bed, off we set for the Grand Teton and Yellowstone National Parks. Winter sets in early here, and this isn’t the most popular time of year to visit, however, it has its advantages. The leaves are still showing their autumn colours, the bright greens of summer replaced by reds, golds and bright yellows. There is also the welcome lack of people. In any case, Wyoming is the most sparsely populated of the United States, with just six inhabitants per square mile (compare that to 355 in Florida) and, off season, you almost have the parks to yourself.

The main risk is the weather. Parts of the Great Loop roads that lead visitors around the main sights in the park have already closed in mid-October, and if we had waited until November then the entrances would have closed because the only vehicles allowed in are snowmobiles. We have had the weather on our side. Every day, although freezing, has been crisp and clear and the skies have been wonderfully bright blue, making the beautiful mountains and lakes, the incredible geothermal features and thundering waterfalls look even more magnificent.

After three days in Jackson Hole and West Yellowstone we moved on to Cody, a town named after   Colonel William Frederick “Buffalo Bill” Cody. After checking into our charming log cabin accommodation, with all the typical cowboy-type attractions have long closed for the winter, we visited the town’s other main attraction… Buffalo Bill Center of the West, a modern complex housing five museums… check your firearms with security at the door. There’s a fantastic collection of Western Art, a Museum of the Native Americans, where you can learn about the history and culture of these tribes, the Buffalo Bill Museum, a colourful display of the life and times of this complex figure, a firearms museum (we gave that one a miss) and a Natural History Museum with stuffed bears, bison and so on.

While we are about animals, so far, we’ve been surrounded by a big herd of buffalo on the road for a quarter of an hour, and we’ve seen deer, moose, elk and a coyote. So exciting!

Inspired by the museum, today we took a detour on our way to Sheridan through the Bighorn Mountains and went in search of the Medicine Wheel. The wheel is believed to have been made over a period of centuries from about 1,500 to 500 years ago. We were the only people there, which is not surprising because the temperature was many degrees below zero and there was a lot of snow. We tried to drive up close to the monument, but the snow was too deep, so we had to reverse down the track, park up and walk up.

I appreciated my two fleecy jackets, Gore-Tex boots and thick socks but it was hard to walk with the freezing wind uphill. I was panting like a dog. I trudged along for half an hour in the snow, looking at suspicious bear and wolf tracks before I gave up. Another three friends continued up the hill to see the 80-foot wheel consisting of 28 limestone boulders in the snow. I jumped back in the Yukon, put the heating on and drank the remaining coffee in my thermos flask. Still, I’m not disappointed… I was 9,642 feet above sea level and the views of the Bighorn Basin were awe inspiring.  We still have another nine days ahead of us in the Wild West. What adventures lie ahead? Watch this space!

← Europäische Union
Disguise, I see thou art a wickedness →
Scroll Up