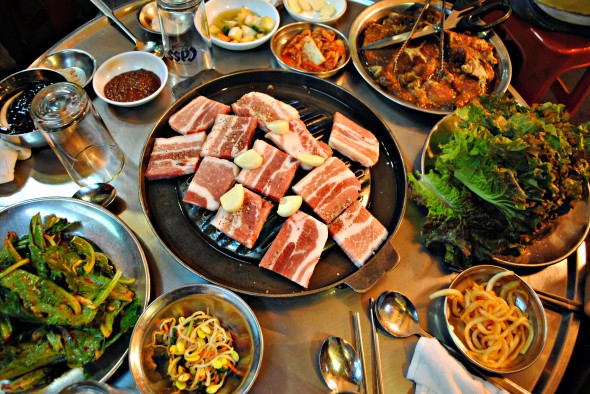 Have you tried Korean food yet? It’s all the rage. Unfortunately, it hasn’t caught on in my village yet, although there are more Chinese and Indian restaurants than you can shake a stick at. I am a bit fed up with Chinese all-you-can-eat buffets and tandoori chicken so I am hoping someone will have the bright idea of opening one soon.

I’ve only ever tried Korean cuisine once, and that was at a Korean barbecue restaurant in New Zealand. I suspect that any self-respecting Korean would say that it was bad, but I have nothing to compare it with. However, I have just had the pleasure of translating a website and almost 200 recipes for a leading Korean sauce company. The problem now is finding somewhere to try out all these new flavours.

The aspect that I am most interested in investigating is ‘umami’ or ‘the fifth taste’, which is, apparently, very strong in Korean fermented sauces. I know I like this umami, but I do not think I know how to identify it. It is described as the strong savoury flavour that makes dishes such as Bolognese sauce and Marmite irresistible (you can keep the Marmite though, I hate it).

Umami has only just been recognised by the West and is now thought of as the fifth taste after salt, sweet, sour and bitter. It is what makes ketchup, meat juices and caramelised meat and vegetables taste so wonderful and it has a lot to do with their glutamate content. The Japanese word ‘umami’ is translated as “yummy”, “deliciousness” or “pleasant, savoury taste”.

Renowned Italian chef Massimo Bottura says that Parmesan cheese is probably the most umami ingredient in western cookery, however, it is found in numerous other foodstuffs such as matured beef, (a cheese burger with ketchup is an umami flavour bomb). Umami is also what makes bacon so wildly delicious, so no wonder it makes a cheeseburger even better.

Other foods for enhancing the umami in your dishes are tomatoes, chicken, mushrooms and sweet potatoes, tofu, soy sauce and carrots. Potatoes, broccoli and green tea, as well as something called edamame (a preparation of immature soybeans in the pod) also do the trick, as do seafood and tuna.

Come to think about it, all these are among my favourite foods. It’s a pity there isn’t an umami slimming diet. I am sure I’d love it!