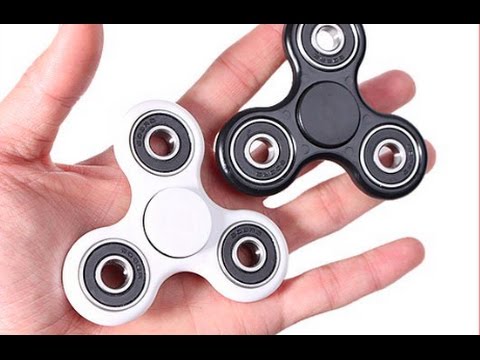 When I was a child, one of the big advantages of my family’s frequent trips of Spain was the availability of toys that were banned in the UK, which made my sister and I the envy of all at the local junior school.

For example, do you remember clackers? These were of two hard plastic balls held to a tab with a cord, which you tapped together and then violently smashed up and down for as long as possible. Unfortunately, there was as good chance that you would break a tooth, knock one of your eyes or break a finger in the process, hence the UK ban on these lethal weapons.

The latest craze now is far more innocuous. The ‘fidget spinner’ doesn’t do anything. It is a piece of plastic with bearings in it that you twirl around in your fingers. They might not blow out children’s eyes or smash their teeth, but they do make me glad I am not a teacher anymore, because I think the sight of 25 kids twirling bits of plastic around would drive me insane.

I heard about this invention, which is taking the world by storm, in a podcast interview with its inventor. Apparently, during long, soul-destroying meeting which required no input from him, he would fidget, click pens (how annoying), open and close a pocket knife (no good for women, it would chip your nail polish) or, perhaps even worse, wobble his leg or tapping his foot (anyone who does this deserves a sharp kick). So, he invented the fidget spinner.

His initial designs were hand-crafted metal creations. When his friends saw them, he received commissions for customer versions and manufactured them and sold them for humungous amounts of money ($800?), and created a company to supply them. Predictably, cheap plastic versions are now being produced everywhere for less than a dollar.

There are all kinds of designs and prices, some of them are cube-shaped and some have lights, but, happily, this is one craze I won’t get sucked into to unless there is some way of typing and spinning bits of plastic around at the same time.

Why can’t I think of a cheap and useless item to manufacture that will bring in enough income to allow me to retire on a yacht in the South Pacific? I bet the inventors of the ‘tamagotchi’ and the ‘pog’ don’t have to clean their own houses.

In the meantime, teaching staff are already banning spinners, despite manufacturers’ claims that they are “”great for anxiety, ADHD, autism, quitting smoking, staying awake on long car drives, etc.”. Teachers know that they are annoying and distracting. Obviously, if the kids are focused on a fidget spinner game or competition, they’re not paying much attention to anything else happening in the classroom. Better bring back the clackers!