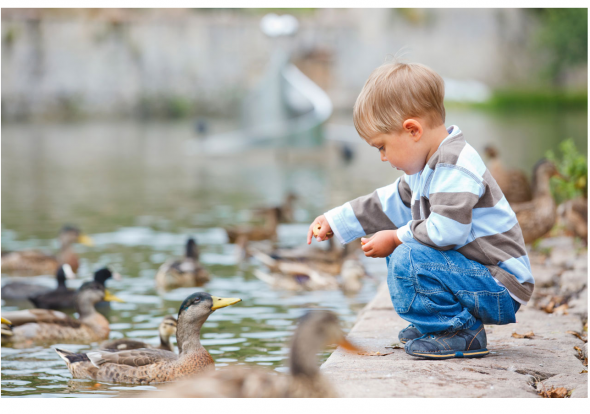 Humans love feeding animals and birds. “Don’t feed the animals” signs in parks are there for a reason.

My husband is obsessed with feeding birds. Apparently, over half of adults in the UK feed birds in their gardens, but with so much natural food around in Spain (i.e. mosquitos, wasps and flies), and our warmer climate, I suspect the percentage is lower here. Although I know that he has good intentions, I have had to ban him from feeding them around the swimming pool because of the mess (guano), so he is now feeds them in front of the house so they can make a mess in the neighbour’s garden instead! They make a real din with their chirruping and twittering, but I do like watching them through the window.

As children, feeding animals is part of our daily entertainment. I remember being taken to the park in Birmingham, clutching my bag of stale bread for feeding the ducks and swans and I have fond memories of taking my son to the marina to feed the hundreds of fish that swim around the boats.

Last year, in South Africa, we paid a princely sum for the privilege of walking with and feeding elephants. We were given buckets of fruit, and handed apples and oranges to these gentle giants took them with their hairy, rough trunks. Also in South Africa, we visited an ostrich farm where we had the dubious honour of feeding ostriches, which have far worse manners than elephants and very sharp beaks.

In Bangkok, we went on a boat tour of the Klongs, buying bags of bread rolls from a floating fish-feeding bread stall, breaking them up and feeding them to the writhing mass of catfish splashing about in the rather dirty water and in Guatemala I couldn’t resist buying cans of hotdogs for the stray dogs.

Yes, feeding animals is a highlight of any holiday. If I had the opportunity to give a bottle to a baby panda, well, I’d probably fly half the way around the world to do it.

According to nature writer Mark Cocker, the “simple Franciscan act of giving to birds makes us feel good about life, and redeems us in some fundamental way.”, however, one study found that it has cascading effects on ecosystems, since studies have reported better control of plant parasites, such as aphids, in areas with bird feeders.