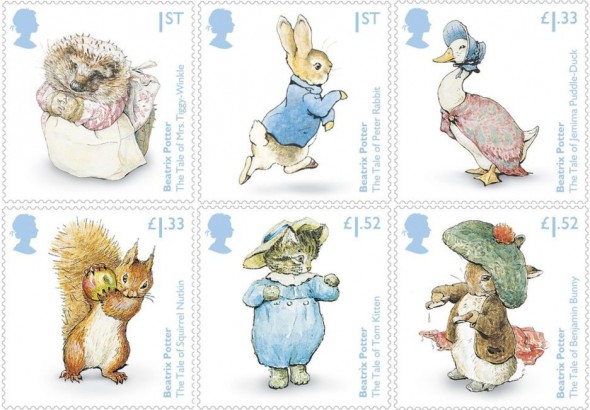 English children and, indeed, children all over the world are introduced to the beautiful stories and illustrations of Beatrix Potter from an early age. This year, 2016, marks 150 years since the birth of this revered author, who has captured the world’s imagination for over 100 years.

She was also an admirable woman who was ahead of her time and whose determination and ambition led her to overcome professional rejection, academic humiliation and heartbreak, succeeding in earning a fortune. Beatrix was an artist, storyteller, botanist, environmentalist, farmer and a businesswoman.

Her beautiful works are timeless. One of my earliest memories is of sitting at the piano with my mother, a wonderful musician, who played and sang songs by Beatrix to sister and I from a wonderful, illustrated song book. Years later, one of the first items I ever bought for my son was a porcelain feeding set decorated with pictures of Mrs Tiggy-Winkle, which I still have!

If you would like your own Beatrix Potter memento, the Royal Mail has just released a set of anniversary stamps which will no doubt delight everyone who receives them, featuring lovely drawings of Squirrel Nutkin, Tom Kitten, Benjamin Bunny and many more.

Potter was fascinated by the natural world. She would explore the countryside with her sketchbook and camera and also drew and sketched her school pets such as mice, rabbits and hedgehogs. Later she was interested in the natural sciences such as archaeology, entomology and mycology and did wonderful watercolour drawings. Her fondness for drawing fungi led to her being widely respected in the field of mycology.

Perhaps her best-loved work of all, The Tale of Peter Rabbit, was originally a letter to a sick child. It stars the rabbits Flopsy, Mopsy, Cottontail and Peter and their mother.

In 1905 she bought Hill Top Farm in the beautiful Lake District in England, using money she had inherited from her aunt. She based several of her books on the farm, such as The Tale of Jemima Puddle-Duck and The Tale of Tom Kitten.

When she died in 1943, she owned 14 farms and more than 4,000 acres of land, which she left to the National Trust. The 17th century farmhouse, Hill-Top Farm is a time-capsule of her life and is visited by many thousands of tourists every year, many of whom travel from Japan and the United States to enjoy the fabulous scenery and picturesque buildings.