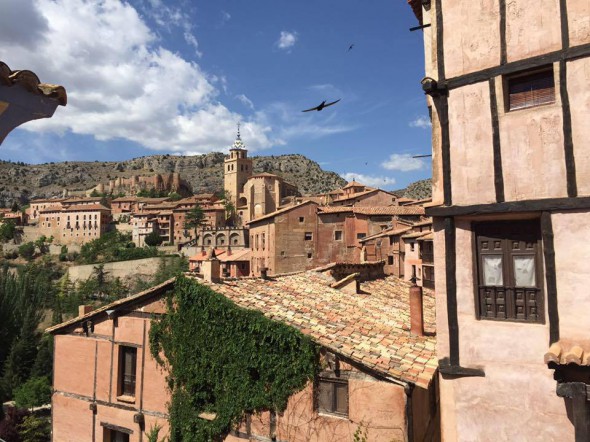 There’s only one way I can avoid working at weekends and that is by packing a case, turning off my computer and going away! That’s exactly what I did two weeks ago when I cleaned the car, picked up three girlfriends and took off for the autonomous region of Aragón.

There were three towns on our very loose itinerary. Delightful Móra de Rubielos was the first stop. Although we only spent enough time to stroll around the lovely streets and monuments and architectural treasures we thought it was beautiful, so much so that we stopped for a refreshing salad and a drink in the pretty square outside the ancient city hall.

Later on, after driving along side roads through some lovely green countryside, we arrived in Teruel. This city is famous for its “Lovers of Teruel”. The story goes that the daughter of a rich man, Isabel fell in love with an impoverished youngster, Diego. Isabel’s father wanted to discourage the match and gave the boy five years during which to make a fortune. If he did so, then he would have her hand in marriage. However, he arrived one day too late, by which time the young woman had been married off to someone else. Both died of ‘love’. You can visit their mummified bodies, which are contained in two sarcophaguses which stand side by side, their hands almost, but not quite touching. The church alongside the exhibit is breathtakingly beautiful.

However, Teruel has far more to offer than this sad tale and you will find endless treasures of Mudejar architecture to explore, some magnificent towers, the wonderful Plaza de Torico where you can sit and enjoy a cocktail or buy some local cheese, ham and liqueurs and much more. Teruel’s cuisine is hearty and delicious, and you’ll find plenty of favourites such as garlic soup and roast lamb. We stayed in an excellent hotel just behind one of the corners of this square, which was the perfect base for exploring the town and staggering back home at night after a fantastic dinner and lashings of the fine local wines.

About half an hour from Teruel high on the list of Spain’s prettiest villages is Albarracín, possibly the highlight of our action-packed weekend away. The former capital of a Moorish kingdom, its Islamic and mediaeval flavour draws large numbers of tourists to this tiny town on a meander of the Guadalaviar River. So beautiful is Albarracín that it has been declared a National Monument. Put on your walking shoes and explore its narrow medieval streets, grab a bottle of water and hike up to the imposing fortified enclosure.

As well as these towns, we also found time to visit a protected landscape area and the source of the River Mundo, a beautiful waterfall.

If you are not lucky enough to live as close as I do to this architectural and natural wonderland, I did notice that Teruel has an airport. This is definitely a great destination for lovers of history, architecture and beautiful landscapes. I recommend you book your accommodation in Albarracín or Teruel in advance, because availability is limited.