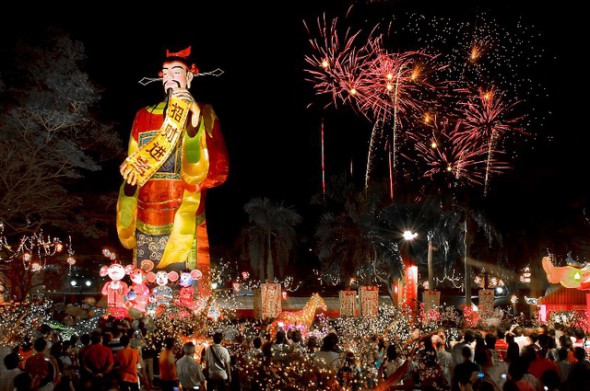 Summer is here, and with it the fiesta season. The lights and banners for the Moors and Christians festivities are already festooning the streets of my local town, Moraira, and within a few days it will be impossible to park, the streets will be cordoned off and my dogs will be trembling with fear when the locals start throwing firecrackers and letting off fireworks. Luckily, I live a few kilometres from the town centre and I can get away from the crowds and noise and with a great view, I can watch the fireworks from the comfort of my own terrace. My town loves fireworks. Sometimes the displays go on for more than 30 minutes… they just don’t let up!

There are more than a dozen different types of aerial fireworks, with very descriptive names. The peony, the chrysanthemum, the willow, the palm, the horsetail and the spectacular ring light up the skies with glittering tendrils, coloured stars and trails of sparks. The dazzling colours in these light shows are the result of careful combinations of just the right mix of chemicals. I can hear the ‘ooohs’ and ‘aahs’ from kilometres away!

Fireworks are basically packets filled with mainly metal salts and metal oxides which react to produce a plethora of colours. When heated, the atoms in each element absorb energy, causing the electrons to rearrange from their lowest energy state to a higher ‘excited state’. As they plummet back down to their lower energy state, the excess energy is emitted of different wavelengths.

Everyone knows that fireworks originated in China around 2,00 years ago. Legend has it that a Chinese cook happened to mix charcoal, sulphur and saltpetre (commonly used back them) and found that when the mixture burned and was compressed in a bamboo tube, it exploded.

The firecrackers that the locals in my town enjoy throwing about so much were also invented in China, supposedly by a monk named Li Tian. The Chinese people still celebrate the invention of the firecracker every April 18 by offering sacrifices to Li Tian.

In Spain, some of the best opportunities to see thousands of euros and gunpowder go up in smoke are the Moors and Christian festivals on the Costa Blanca and the Night of San Juan in the same region, which is a pagan celebration of the Summer Equinox. To celebrate San Juan, people build bonfires on the beach, tuck into picnics and jump over the fires and the waves.