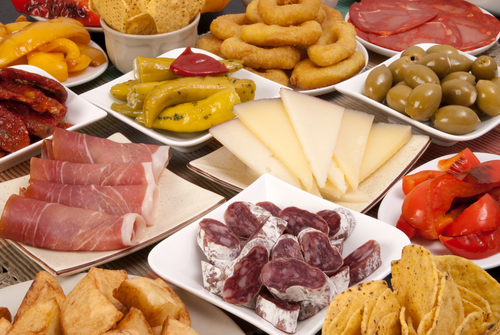 The Spanish ‘menu of the day’, a set menu consisting of a starter and homemade main course, bread, a drink and a coffee or dessert, has had many incarnations. Inexpensive set meals date back to the 19th century, but were first imposed the Spanish Ministry of Information and Tourism in the sixties. Considering that they received such a lukewarm welcome from the catering industry, it is interesting that the concept is still alive today.

In 1964, to attract holidaymakers with cheap food, all businesses serving food and drinks were required to offer a ‘tourist menu’, a starter consisting of hors d’oeuvres or soup followed by fish, meat or eggs with garnish, a dessert or cheese, bread, all washed down by a quarter litre of wine, beer, sangria or another drink. It had to be typical Spanish food, advertised in a prominent position and served quickly and efficiently.

I was still a baby then, but in the seventies my parents often took us for a menú, which was great because my mother couldn’t get the hang of the oven at our house in Spain, and she burnt everything).Favourites were hors d’oeuvres (entremeses), which comprised slices of cold meat and cheese, half boiled egg, some tinned asparagus and perhaps a tomato. I remember individual, perfect, piping hot Spanish omelettes and spaghetti with tinned tomato sauce and cheese or escalope Milanese.My favourite was pollo al ajillo, chicken chopped into small pieces and fried with a handful of whole garlic cloves and some nice greasy hand-cut chips. I don’t know anywhere that serves these simple things now.

Restaurant owners understandably resented having to serve cheap options at the expense of their more profitablea la carte dishes, but the government wasn’t having any of it. Prices were fixed according to the category of the restaurant and waiters had to do their best to subtly discourage guests. In 1974 the maximum price was just 100 pesetas. In 1981 price control was abolished and the menu was renamed ‘menu of the house’ and first class and luxury restaurants no longer had to provide one.

The 1965 restaurant law was overturned as a result of the European Directive passed in 2006 and since the Constitution was passed it is up to the autonomous regions to oblige restaurants to provide a set meal. These days only Aragón, Asturias and Navarra oblige low category businesses to serve one. However, they’re still a popular feature in restaurants all over Spain, and are unlikely to disappear any time soon. It would break the hearts of tens of thousands of British pensioners!