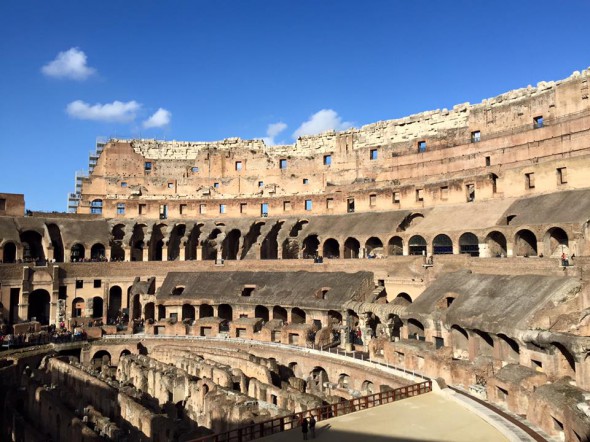 I am writing this blog from Rome, where I arrived the day before yesterday to be greeted by a huge sign over the luggage console at the airport in incorrect English. It is so hard to leave the job behind when I travel, but I have decided that even though I can’t stop the grammatical mistakes from penetrating through my eyes, what I can let them float immediately out of the top of my head before they heat up my brain. Also, it’s nice to know that Spain is not the only place that sends huge museum panels to print at the cost of thousands of euros without getting the text checked by a native speaker. That also goes for the Coliseum… yes, the great wonder of the Roman world, visited by thousands of tourists every day, where the designers did not bother to spend a few euros getting the information panels translated by a professional. They are full of mistakes.

Still I am not here to inspect the state of the Italian translation industry. I am here to enjoy the architectural and artistic wonders of this great city and to get lost. So far, 2016 has been ‘the year of getting lost’. Just over a week ago I visited Valencia with a friend. We often go to the Valencia, which has so much to offer and we almost always get lost. On this occasion we went to take advantage of the January sales. Based on previous experiences, this time we took great care to take a photo of the bay where we had parked in the underground car park, a photograph of the exit by which we left, and we made a mental note of the shops around the staircase. Did it help? No, it most certainly did not. At the end of our trip, after five hours trawling around the shops, loaded down by heavy bags, it took us an hour staggering around the streets with sore feet to find the way into the huge underground labyrinth that is the San Agustin carpark and which must have dozens (I am exaggerating) of entrances. The GPS on my iPhone was no help, because I didn’t know what to programme in. Does anybody know of an app that will take me back to my car without getting lost?

This trip to Rome is no different. Usually before visiting a new city I read the guidebook a couple of times and decide more or less which areas I want to explore. This time, due to an ‘incident with the lorry’ my guidebook only arrived the day we left, and yesterday we walked for eight hours, most of the time, I suspect, in circles! Well, it’s almost time to set out for another day on the streets of Rome. Even if I do get lost, I know it’s going to be exciting and full of surprises… I just hope nobody expects me to tell them where I’ve been because I have absolutely no idea!