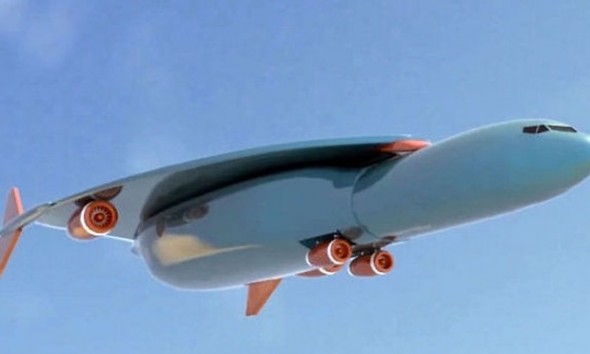 Even with modern, super-duper entertainment systems, flying can be such a bore. Imagine we could just do as Captain Kirk did and say “Beam me up, Scotty”! But then there’s the risk of a molecular mix-up, as per that horror film, “The Fly”. Boring or not, planes are still the way to go. But couldn’t they go a bit faster?

Supersonic air travel is nothing new. In fact it was back in 1969 when Corcorde or Aérospatiale-BAC Concorde entered into service 1976 and it continued to fly commercial routes until 2003. I remember seeing the Concorde in the sky over London, although my parents could not afford the £4,000 it cost for a trans-Atlantic trip. That kind of luxury was for real jet-setters. While subsonic commercial jets took eight hours to make the journey from NY to Paris, a supersonic flight took around 3.5 hours, but it was a noisy vehicle and was only allowed to break the sound barrier over the Atlantic Ocean.

The Concorde only had one fatal accident, but it was a really bad one. In July 2000, it left Paris-Charles de Gaulle to New York, but crashed in Gonesse, France killing 100 passengers, nine crew members and four people on the ground. The cause was a metallic strip that had fallen from another aircraft that had taken off just minutes earlier. This punctured a type on the Concorde which exploded and caused a fuel leak which led to a fire. One engine had to be shut down and, unable to gain altitude or speed, it crashed.

In April 2003 the Concorde was retired on the grounds of a slump in air travel caused by the September 22 attacks on the World Trade Center. The aircraft had also become outdated and unviable. However, the race is now on to create a new breed of supersonic passenger aircraft which could be flying as soon as the 2020s.

Technology has advanced at a dizzying pace since the Concorde was designed and with major players such as NASA, Aerion, Airbus and Spike Aerospace are in the throes of some fascinating research. Who know? Perhaps the faster, quieter travel will be available soon. Lockheed Martin has produced an amazing-looking design for an 80-seater airline that reduces sonic boom to a thump which would be suitable for use over land, while Airbus has been awarded a patent in the United States for its Concorde-2, which looks like something out of a comic book rather than a real aircraft. Incredibly, this craft would rise up vertically into the air with its sonic boom travelling horizontally across the sky. Designed to more than double the speed of the original Concorde, we could leave the UK and be in San Francisco in just three hours.

Just imagine! We would be leaving London at lunchtime and arrive in Sydney in time for tea. Would I be able to afford a ticket? Probably not…. But I would certainly save and save until I could afford the trip of a lifetime. Amazing!