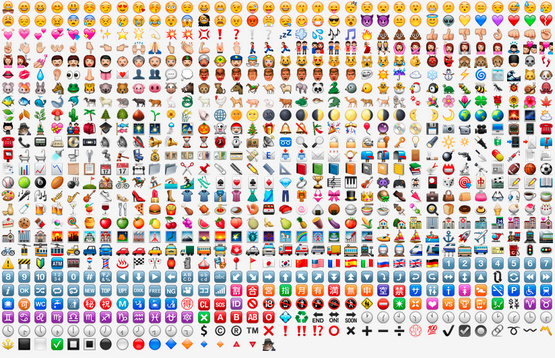 People used to call me for a chat, but now everyone is so busy that they just send me WhatsApps. I suppose I don’t mind all that much, but I do feel a bit insulted when I know they’ve sent the same message to everyone. Whatever happened to sitting on the sofa with your friend for a good long gossip?

Half of the time I don’t even know what the other person is trying to tell me because instead of words the messages consist of a monkey, a flower, a balloon and a couple of camels. I just don’t get what most of the emojis are supposed to mean. The word emoji originated in Japan, and means ‘picture letter’. Each of the emoji characters has an official name and belongs to one of the categories (which are people, nature, food and drink, celebration, activity, travel and places, objects and symbols, flags, new emoji and skin tone modifiers (we must be politically correct, even with our emojis). Do I have time to learn them? No, I don’t.

Because I don’t really understand the messages I receive I probably don’t understand the ones I send either. Does palm tree – cake – love heart have some special meaning? Meet in the oasis for a slice of cake and a cuddle?

Even on my big iPhone 6 the emojis are pretty tiny, which is probably why I haven’t been understanding the nuances, but after hearing an excellent podcast called “The Allusionist” by the extremely witty and incredibly brilliant Helen Zaltzman entitled Mixed Emojions I decided to do a bit more research.

You might like to take a look at emojipedia.org where you will find some nice big images of the emojis, including the Android and ChromeOS versions. I suppose if I had the time I could learn them and become as proficient as a ten-year-old with speed-of-light thumbs but I lack the inclination.

I prefer listening to podcasts rather than sending unintelligible messages to my friends, particularly the above mentioned The Allusionist, from which I learned that emojis are actually a newer version of the cuneiform system of writing developed by the ancient Sumaerians of Mesopotamia. As long ago as 3500 BC this writing system, which consisted of carefully cutting symbols into wet clay, was used to produce pictograms and later word-concepts. And then… we learned to write… so if you want to tell me something, please just telephone me or use words….