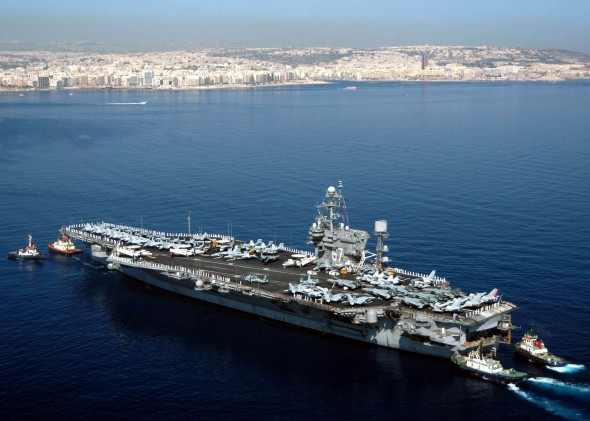 Interpreting jobs can be a bit of a lottery. The job might be a piece of cake. Your client is accustomed to working with an interpreter and you quickly find your rhythm. Other times the client forgets that you are a human being and not a computer with 40 GB of RAM. They belt out words, sentences, entire paragraphs at top speed. That’s why interpreters sometimes need to be a bit assertive and use their personal skills to refocus the pace of the dialogue so that they can do a good job.

One scenario I dread is when the client unexpectedly starts talking about an obscure topic or using ‘weird’ words about which I have absolutely no idea at all. When I was about 18 and my knowledge of Spanish was limited to “I’d love to go to the beach with you” and “Yes, I’d love another glass of wine”, some friends in the American Navy League asked me to accompany a group of Spaniards around a US Aircraft Carrier, the USS John F. Kennedy, which was visiting Benidorm.

Because I had been led to believe that the level of language skills required would be the ability to say things like “Mind your head” and “Don’t press that red button that says Fire Missile”, imagine my horror when a military engineer described the on-board aircraft landing mechanism and looked at me to translate it for the rest of the group.

I was embarrassed but, of course, I was not a professional translator. I had only said I would do this task because I was hoping that a Richard Gere look-alike wearing a white officer’s uniform would scoop me off in his arms and carry me off into the sunset. I think I just shrugged my shoulders, smiled charmingly and said, “Sorry, no idea!”

Obviously, this is not an option when you are on the job. On numerous occasions I had the honour to interpret for renowned Japanese chef Hiroko Shimbo who came Spain from New York to give master classes in Japanese, Vietnamese and Thai cooking to Spanish chefs. The teaching sessions were easy for me. Although Hiroko obviously has an accent I soon got used to it and we had excellent rapport.

My problem came during a live radio interview with a rather famous chef, who will remain nameless. “Hiroko”, he said, “What are the main characteristics of Japanese cuisine. “Well”, replied Hiroko, “It’s the textures. The nine main textures are….”, and then quickly recited a list like this one (these are not the exact words) “sticky, slimy, crunchy, moist, silky, hard, soft, gelatinous, thick, thin….”. The list went on and on, each difficult-to-recall word spilling from her mouth and disappearing, untranslated, into the ether.

What a nightmare! Of course, I just paraphrased what she had said. Everyone who heard the interview said it was fine and that they hadn’t noticed a thing. If only they had seen my red face and horrified expression! That was the last radio interview I have ever agreed to do!