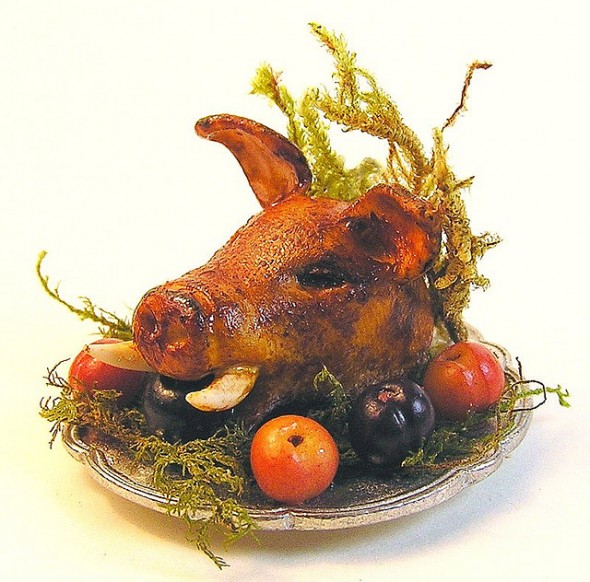 This is the season to be jolly and in many homes Christmas is an excuse to put moderation to one side and embrace the communal enjoyment of drinking and eating with family and friends.

In Medieval times, people fasted on the days leading up to Christmas, serving mainly fish before celebrating with great big blow-out feast on Christmas Day. If you were lucky you might be served a boar’s head (perhaps with an apple in its mouth), or even a buzzard, which was a great delicacy at many great dinners. Although my Spanish husband would quiver with delight if someone served him a boar’s head, personally I am thrilled that this particular tradition has died off in my circles.

In modern England, while a few slices of turkey might sound nice, some people just have to be different. One fashion I really don’t understand is the ‘multi-bird roast’. A top-seller at English supermarkets, it consists of a guinea fowl, a duck and a turkey breast stuffed inside a goose. It costs £200, is Tudor inspired and sounds disgustingly over-indulgent to me, but there’s no accounting for tastes. Give me a nice big dish of roast potatoes any day.

Back in the jolly old medieval times, a traditional Christmastime drink once enjoyed exclusively by the European aristocracy was eggnog. If you have never heard of it, eggnog is a delicious blend of milk, eggs, spices and brandy guaranteed to keep out the winter cold. Served chilled or hot, the brandy can be replaced with other spirits such as bourbon. Creamy, boozy… yummy!

Back in 14th century England, seasonal revellers would indulge its predecessor, posset, a drink of hot milk curdled with ale. Eggs were added and eggnog was born, however only the rich could afford such luxurious ingredients as eggs and milk, and this treat was abandoned until the American colonies were formed. In the New World with rum galore and all the cows (for milk) and chickens (for eggs) they could ever need, eggnog became an indulgent tipple for the masses. It is still extremely popular and there are numerous recipes to be found on the internet. Why not whip up a batch for your friends this Christmas?

Cheers and Happy Holidays to you all!