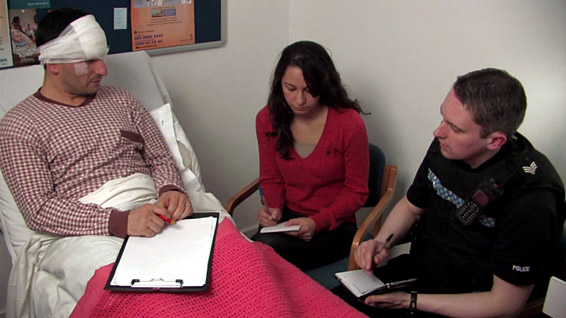 A lack of appreciation of the importance of professional interpreting services and official attitudes to foreign language speakers is hindering their ability to help victims of crime. In my town, which relies heavily on tourism and foreign pension revenue, the police force and local council do not take the language needs of residents needing their services, even though they are quick to boast about the number of nationalities living together in this ‘multicultural’ society. Tax-paying residents and holidaymakers who go to them for help are all too often treated as a ‘nuisance’ and told to ‘bring an interpreter’, who will inevitably be some guy who works in the local bar and speaks a bit of Spanish, not a professional.

Other, more enlightened forces, such as the New York Police Department, understand the importance of having a suitable foreign language programme to support their work for the community. The city has put together a service to help victims who speak not only more common languages such as Spanish, Chinese and Russian, but also others like Pashto, Uzbec, Punjabi and Urdu. Obviously the scale is different, but the attitude and idea should be adopted here.

In the case of domestic violence calls, many of which involve immigrants, it is a critically urgent safety issue and police officers need to be made aware of its importance. When things go wrong the consequences can be serious.

Even when an interpreter is called, the authority’s ‘attitude’ can still be inappropriate. An interpreter’s work with the police or courts is often quite important, but unqualified people are frequently used. People with no specialised training and who are not working legally are often called to interpret in court and for the police force, thus enabling the authorities to ‘save’ on cost of a professional interpreter whose fees are higher.

Translators and interpreters are important links in the justice system and the quality of their work and availability can have a pivotal effect on the outcome of a situation. We need to end situations where one friend interprets for another or, in cases of domestic violence, where the abuser is the one who is filtering the content in the victim’s native tongue for the authorities, which easily leads to omissions or interpretations that cast doubt over the entire proceeding. This interpretation service must be of the highest quality, professional, and impartial.