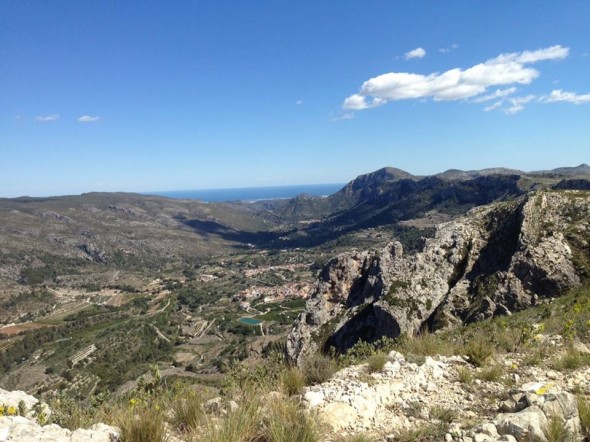 World Poetry Day took place on 21 March 2014, when the cherry trees are in full bloom in the mountains of Alicante.

In the words of Irina Bokova, Director-General of UNESCO, “As a deep expression of the human mind and as a universal art, poetry is a tool for dialogue and rapprochement. The dissemination of poetry helps to promote dialogue among cultures and understanding between peoples because it gives access to the authentic expression of a language.”

This was certainly the case in the Alicante village of Benissivà, in Vall de Gallinera, where 170 walkers of different nationalities set out on a five-hour hike in the mountains, with regular stops to listen to poetry recitals in different languages, mainly Castilian Spanish, Valencian and, of course, English! There were also performances of classical music by a violinist and a clarinet player, who had incredibly good lungs to be able to perform after hiking up the steep mountainside.

After three hours of trudging along the rocky path, we stopped for a ‘snack’, laid on by the event organisers, who run a local rural guesthouse, Casa Gallinera. This consisted of some filled rolls washed down with chilled cava, which they had carried all the way up to the top. During the break, numerous poems were read out to much applause, some by renowned poets, some by the speakers themselves and even, in my case, a Shakespeare sonnet, very popular with the Americans and English walkers who were rather perplexed by the whole event.

With new energies, we continued along to a ‘cave’, which is really part of the mountaintop that was bricked in by Moorish shepherds in the far distant past. By candlelight, more poetic woks were recited and participants enjoyed some fresh dates before tackling the final stretch of path which leads to a huge hole in the granite ridge, before descending to the village for a meal of local food and wine, and of course, more poetry.

The event is organised by Casa Gallinera every year and is a marvellous way of seeing some breath-taking views in good company.